How to stop worrying and start delivering… 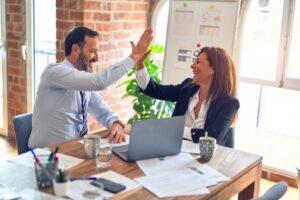 When I am working on a one-to-one high-performance coaching project with a senior leader, the first question I ask them is, ‘when you sit down with your CEO or Board of Directors at the end of the year, how are they going to measure your success?’.

A good client of mine, the CEO of a large organisation asked me to work with his new CFO.

The CFO had only recently joined the company, and his first 6 months had not gone well.

He was missing deadlines and was not supporting the CEO in the way he expected to be supported.

The CEO was beginning to believe that he had hired the wrong person.

When I met the CFO, he looked worn out, under pressure, and was probably ready to throw the towel in himself.

He was coming in early, working through lunch, staying late, and taking work home at weekends.

I asked him what were his key deliverables,  i.e. what was his success in his role going to be measured on, and who was his number one key stakeholder in this process?

His initial view was it was his role to assist everyone in the business.

After a bit of prodding, he said that his key stakeholder was the CEO.

I asked him to call a meeting with the CEO, his main output being to get a crystal-clear answer…‘at the end of the year, how are you going to measure my success?’

When we met the following week, it was like a weight had been lifted from his shoulders.

I worked with him over the next few months to further develop his assertive, influencing, and delegation skills.

I also met his boss on a monthly basis and month on month, I could see how delighted he was with the progress of his new CFO.

The CEO of Cadburys Gumbase, Noel Madden, a fantastic senior leader, who sadly passed away last year, used to always say to me, “to be successful in business today, we need to have a relentless focus on our key priorities”.

The leaders that are successful in business are not the ones that say yes to everything, they are the leaders that deliver on the key priorities of their boss, their business, and their customers.

Your challenge this week: are you crystal clear on how your boss is going to measure your success at the end of the year?

If not, you need to meet with them and find out.

This site uses Akismet to reduce spam. Learn how your comment data is processed.