When trying to engage and retain your staff – beware the law of diminishing intent! 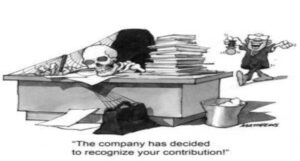 I was recently working with a company to raise its employee engagement and increase its staff retention.

Study after study has shown that appreciation is one of the key workplace engagers.

When I work with leadership teams one of the first things I ask them is, ‘what is the feedback culture in your organisation?’.

Positive – people in the organisation regularly receive both formal and informal feedback on what they have done well?

Negative – people in the organisation only get feedback when they have done something wrong or there is an issue?

None – people in the organisation normally don’t hear anything?

Usually, the senior leadership team will tell me that they are people-focused and that the culture would be one of regular positive feedback.

When I meet the middle managers and ask them the same question, they tell me that the culture of feedback from senior management to middle management is usually none or negative.

When I ask them what culture of feedback they engage in with their staff, they nearly always tell me, it is one of positive feedback.

But when I meet the frontline staff, they tell me it is ‘none’ or ‘negative’.

How is this possible, these are intelligent experienced leaders?

The reason for this is the ‘law of diminishing intent’.

Most leaders are well-meaning and see the benefits of having a culture of positive feedback. They have the intention of giving their people positive feedback, or in the words of Ken Blanchard, the famous leadership writer ‘catch your staff doing the right things’.

But as they are so busy, they don’t actually take the time out to give this feedback.

Why there is a gap between the feedback culture they perceive to be in the organisation and the one that is actually there is, one of ‘intent’.

Because they intended to do it, they get the ‘positive feeling’ themselves but as most of their staff are not mind readers, they don’t know of this intent.

Action point: Keep your word and do what you say you’ll do – twice a week go through your list of key stakeholders and ask yourself, ‘did any of them did something that warrants feedback from me?’, then make a point of giving this feedback to them, ideally face to face.

This site uses Akismet to reduce spam. Learn how your comment data is processed.